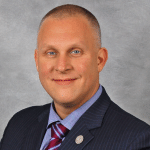 It is hard to believe that 2020 is in the rearview mirror and we are already approaching the mid-point of 2021. The Railroad Retirement Board (RRB) is still operating in a remote capacity with field offices closed to the public. Hopefully, in the not too distant future, I will be writing to advise you of plans for getting back to normal operations. Today, however, I am writing to share a friendly reminder with you about action which every active employee should take on an annual basis – and may be of particular importance this year to some, in light of the unique work circumstances many encountered.

Each year, on or before the last day of February, employers must report service and compensation for each employee who performed compensated service in the preceding calendar year. The RRB, in turn, credits the service and compensation records of individual employees based upon these reports and in June of every year, the RRB releases Form BA-6 to each employee for which compensated service for the preceding year was reported. The Form BA-6 contains the information recently reported for the preceding year, as well as the information reported for three preceding years. For example, the Forms BA-6 which will be released by the RRB in mid-June of 2021 will contain service and compensation reported for the years 2017 through 2020. Regardless of the amount earned, the amount of compensation shown on the Form BA-6 will always be limited by the maximum creditable Tier I compensation amount for the calendar year. For calendar years 2017 through 2020, the maximum amounts creditable are $127,200, $128,400, $132,900 and $137,700, respectively. In addition to showing the creditable compensation for the years 2017 through 2020, the Form BA-6 issued in mid-June of 2021 will show the months for which the employer reported railroad service for the employee during the years 2017-2020.

REMEMBER: The law limits the period during which corrections to service and compensation records may be filed to four years from the date the report was due at the RRB, so it is very important for employees to request a correction within that period of time. Any railroad employee who thinks that the Form BA-6 contains an error should be certain to follow the directions on how to file with the RRB a protest of the information contained on the Form BA-6. 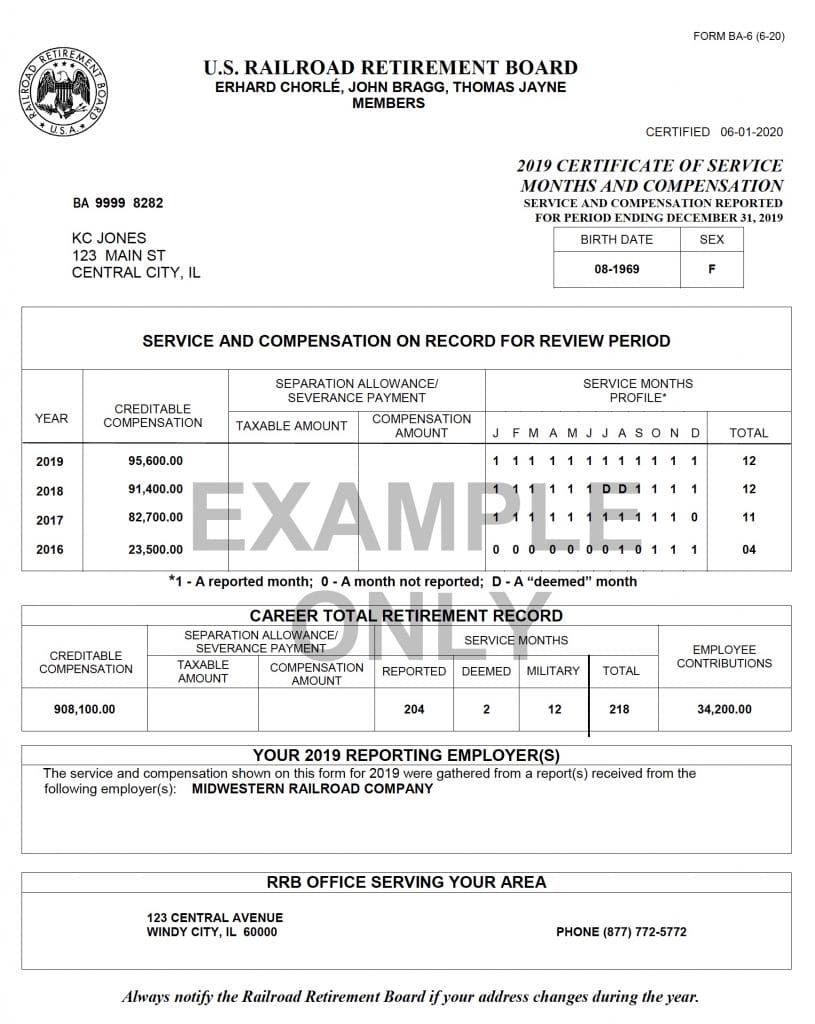 Each year, the U.S. Railroad Retirement Board (RRB) prepares a “Certificate of Service Months and Compensation” (Form BA-6) for every railroad employee with creditable railroad compensation in the previous calendar year. The RRB will mail the forms to employees during the first half of June. While every effort has been made to maintain current addresses for all active railroad employees, anyone with compensation reported in 2018 who has not received Form BA-6 by July 1, or needs a replacement, should contact an RRB field office by calling the agency toll-free at 1-877-772-5772.

Form BA-6 provides employees with a record of their Railroad Retirement service and compensation, and the information shown is used to determine whether an employee qualifies for benefits and the amount of those benefits. It is important that employees review their Form BA-6 to see whether their own records of service months and creditable compensation agree with the figures shown on the form.

In checking the 2018 compensation total, employees should be aware that only annual earnings up to $128,400 were creditable for Railroad Retirement purposes in that year, and that $128,400 is the maximum amount shown on the form. To assist employees in reviewing their service credits, the form also shows service credited on a month-by-month basis for 2017, 2016, and 2015, when the creditable compensation maximum was $127,200 for 2017 and $118,500 for both 2016 and 2015. The form also identifies the employer(s) reporting the employee’s 2018 service and compensation.

The form also indicates the number of months of verified military service creditable as service under the Railroad Retirement Act, if the service was previously reported to the RRB. Employees are encouraged to submit proofs of age and/or military service in advance of their actual retirement. Filing these proofs with the RRB in advance will streamline the benefit application process and prevent payment delays.

For employees who received separation or severance payments, the section of the form designated “Taxable Amount” shows the amounts reported by employers of any separation allowance or severance payments that were subject to Railroad Retirement Tier II taxes. This information is shown on the form because a lump sum, approximating part or all of the Tier II taxes deducted from such payments made after 1984 which did not provide additional Tier II credits, may be payable by the RRB upon retirement to qualified employees or to survivors if the employee dies before retirement. The amount of an allowance included in an employee’s regular compensation is shown under “Compensation Amount.”

Form BA-6 also shows, in the section designated “Employee Contributions,” the cumulative amount of Tier II Railroad Retirement payroll taxes paid by the employee over and above Tier I Social Security equivalent payroll taxes. While the RRB does not collect or maintain payroll tax information, the agency computes this amount from its compensation records in order to advise retired employees of their payroll tax contributions for federal income tax purposes.

Employees should check their name, address, birth date and sex shown at the top of the form. If the form shows the birth date as 99-9999 and the gender code is “U” (for unknown), it means the RRB is verifying his or her Social Security number with the Social Security Administration. Otherwise, if the personal identifying information is incorrect or incomplete (generally a case where the employee’s surname has more than 10 letters and the form shows only the first 10 letters) or the address is not correct, the employee should contact an RRB field office. The field office can then correct the RRB’s records.

Any other discrepancies in Form BA-6 should be reported promptly in writing to:

The employee must include his or her Social Security number in the letter. Form BA-6 also explains what other documentation and information should be provided. The law limits to four years the period during which corrections to service and compensation amounts can be made. 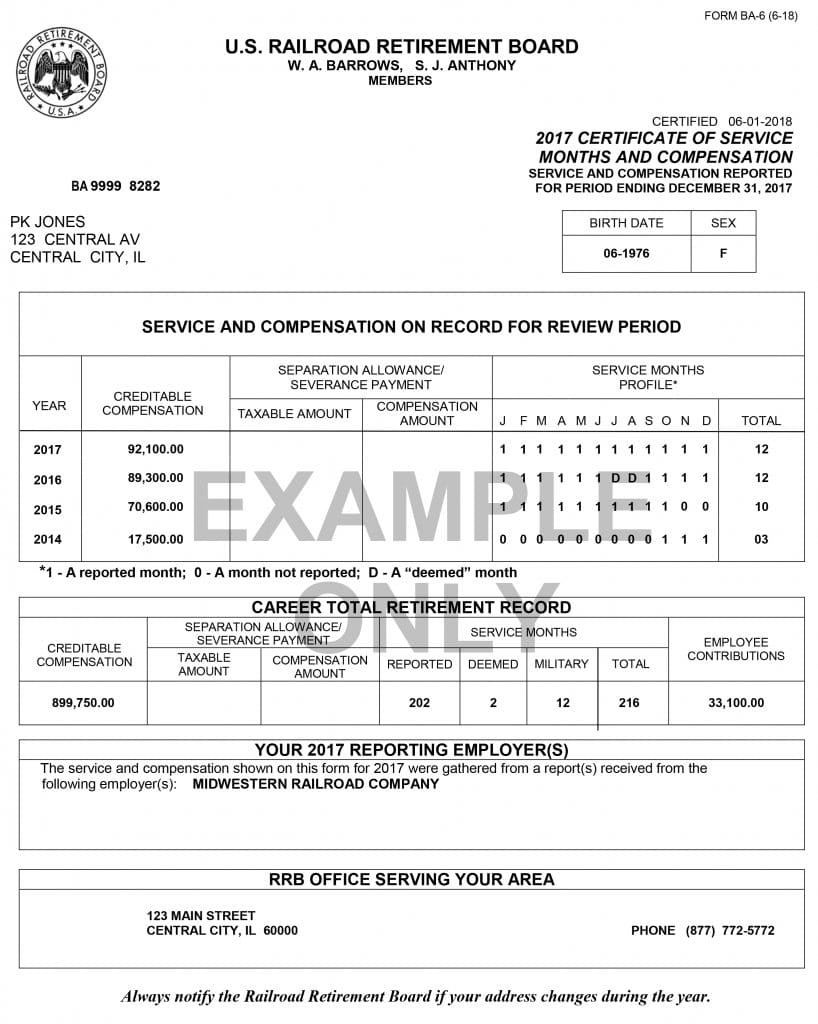