BILOXI, Miss. – An eastbound CSX train hit a packed charter bus that was stuck on the tracks at approx. 2 p.m., Tuesday, March 7. Four fatalities have been reported and several people were airlifted from the scene. Nearly all of the 50 people aboard the bus were injured, several critically.

Click here to see video and read more from CNN.com.

WASHINGTON – Transportation fatalities in the United States decreased by 3 percent in 2013 from 2012, according to preliminary figures released today by the National Transportation Safety Board.

Fatalities in all modes of transportation totaled 34,678 in 2013, compared with 35,796 in 2012. Deaths in marine, aviation, highway and pipeline transportation decreased, although there was a rise in rail deaths.

“While this decrease represents a good trend, much more work needs to done, because 35,000 deaths is very troubling,” said NTSB Acting Chairman Hart. “NTSB continues to address safety issues in all modes to reduce deaths and injuries on our roads, rails and waterways, as well as in our skies.” 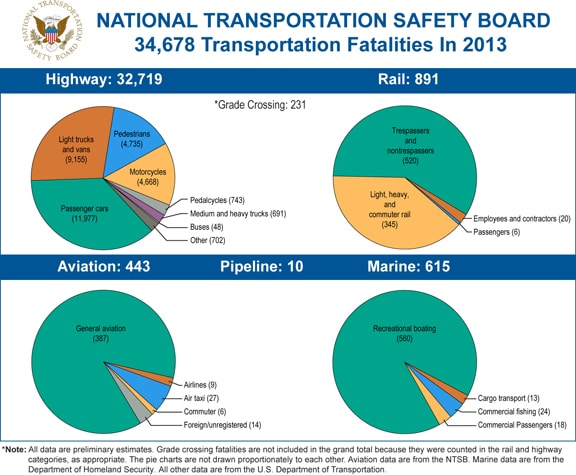