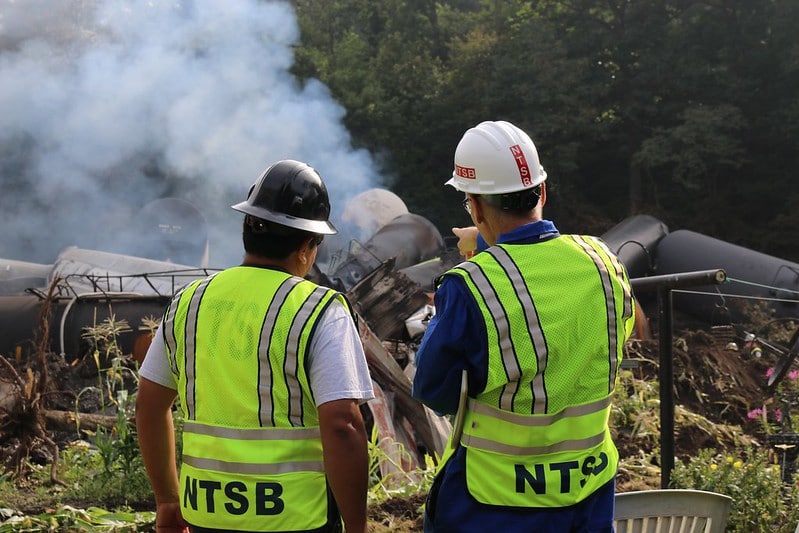 Norfolk Southern has sued in federal court an engineer and conductor who were aboard a freight train than collided with another NS train last month in Scott County, Ky.

According to the Lexington Herald-Leader, the suit claims the crew ignored a signal and failed to reduce the speed of their moving train and prevent the March 18 collision with a stopped train.

NS’s lawsuit seeks compensation from the crew for damages caused by the collision, which destroyed two locomotives and caused 13 cars to derail, the newspaper reported.

Read the full story at the Lexington Herald-Leader’s website.

Below are the preliminary findings of the National Transportation Safety Board (NTSB) as published on their website.

When the train derailed, it was on its first regular passenger service trip on a single main track (Lakewood subdivision) at milepost (MP) 19.86. The lead locomotive, the power car, and two passenger railcars derailed onto Interstate 5. Fourteen highway vehicles came into contact with the derailed equipment.

At the time of the accident, 77 passengers, 5 Amtrak employees, and a Talgo Incorporated technician were on the train. Of these individuals, 3 passengers were killed, and 62 passengers and crewmembers were injured. Eight individuals in highway vehicles were also injured. The damage is estimated to be more than $40.4 million.

At the time of the accident, the temperature was 48˚F, the wind was from the south at 9 mph, and the visibility was 10 miles in light rain.

The lead locomotive’s event data and video recorders were successfully downloaded and processed in the NTSB’s Video Recorder laboratory in Washington, D.C. An initial review of the final portion of the accident sequence revealed the following information:

Positive Train Control (PTC), an advanced train control system mandated by Congress in the Rail Safety Improvement Act of 2008, is designed to prevent train-to-train collisions, overspeed derailments, incursions into established work zone limits, and the movement of a train through a switch left in the wrong position. If a train does not slow for an upcoming speed restriction, PTC will alert the engineer to slow the train. If an appropriate action is not taken, PTC will apply the train brakes before it violates the speed restriction. In this accident, PTC would have notified the engineer of train 501 about the speed reduction for the curve; if the engineer did not take appropriate action to control the train’s speed, PTC would have applied the train brakes to maintain compliance with the speed restriction and to stop the train.

Central Puget Sound Regional Transit Authority (Sound Transit) is a public transit agency in the State of Washington. Sound Transit is the owner of the Point Defiance Bypass tracks. The Washington State Department of Transportation (WSDOT) is the owner of the controlling locomotive, and 11 of the 12 passenger cars. WSDOT contracts with Amtrak to operate the train service. As part of that contract with WSDOT, Amtrak provides the train crews and locomotive maintenance. Sound Transit reported that the PTC system on this line was not operational at the time of the accident. The current Federal Railroad Administration (FRA) deadline for PTC implementation is December 31, 2018.

The 55-year-old engineer had been working for Amtrak since May 2004 and had been promoted to engineer in August 2013. The other crewmember in the cab of the locomotive was a 48-year-old “qualifying” conductor who was being familiarized with the territory. This conductor had been working for Amtrak since June 2010 and had been promoted to conductor in November 2011. As of the date of this report, the NTSB has not yet been able to interview either operating crewmember of the lead locomotive due to their injuries sustained in the accident.

The parties to the investigation include the FRA; Amtrak; Sound Transit; State of Washington Utilities and Transportation Commission; Siemens Industry, Incorporated (manufacturer of the locomotive); the Brotherhood of Locomotive Engineers and Trainmen; and the International Association of Sheet Metal, Air, Rail and Transportation Workers.

The information in this report is preliminary and will be either supplemented or corrected during the course of the investigation.

CBS reports that high-speed, southbound Amtrak Cascades train 501 derailed on an overpass this morning near DuPont in Washington state. At least one train car crashed down onto Interstate 5 and blocked all lanes of traffic.

Authorities say that injuries and casualties have been reported but no details as to how many have been given. First responders are treating the accident as a mass casualty event.

The cause of the accident is still under investigation by the National Transportation Safety Board (NTSB).

FOX5NY reports that 103 people were injured when Long Island Rail Road (LIRR) train 2817 derailed at the Atlantic Terminal in Brooklyn, N.Y. at 8:20 a.m.

The first train car left the track, but no other cars seemed to have derailed. Approximately 600 passengers were on the train at the time of derailment.

Two CSX trains collided in Marion County, Fla. in the early hours of Wednesday, Nov. 16, causing approximately 20 train cars to derail. Two members of the train crews were treated for injuries and released without hospitalization. An estimated 15,000 gallons of fuel was spilled.

Federal investigators are placing the blame squarely on Union Pacific Railroad for their lack of track maintenance as the cause of the June 3rd fiery derailment that resulted in a mass evacuation as 42,000 gallons of crude oil spilled into the small town of Mosier, Oregon. Read the complete story here.  Photo courtesy of Silas Bleakley, KOIN 6 News. &nbsp; &nbsp;

Oregon Live reported that approximately 100 residents remain unable to go back to their homes in Mosier, Oregon, following an oil freight derailment on Friday.

Possible environmental concerns arose regarding the Columbia River, as a light oil sheen can be seen floating on the river’s surface.

According to The Oregonian, a Union Pacific oil train traveling through the Columbia River Gorge derailed and caught fire Friday afternoon. Although no injuries were reported, local schools evacuated students and nearby state highways were shut down.

The train originated from North Dakota and was carrying the volatile Bakken crude oil to Washington state. Eleven of the 96-car train derailed almost 70 miles east of Portland, near the town of Mosier, Ore.

SMART TD Washington State Legislative Director Herb Krohn has been briefed on the accident and was dispatched to the scene. Krohn serves on the Transportation Division Rail Safety Task Force.

Click here to see pictures of the derailment from RT news.

The National Transportation Safety Board (NTSB) held a board meeting (webcasted live) yesterday, detailing the probable cause of the May 2015 Amtrak train 188 derailment outside of Philadelphia.

The derailment caused eight people to lose their lives and over 200 injuries. The NTSB found that “the probable cause of the accident was the engineer’s acceleration to 106 miles per hour as he entered a curve with a 50 mile per hour speed restriction, due to his loss of situational awareness likely because his attention was diverted to an emergency situation with another train. Contributing to the accident was the lack of a positive train control (PTC) system. Contributing to the severity of the injuries was the inadequate requirements for occupant protection in the event of a train overturning.”

The NTSB recommended to the FRA that they consider requiring railroads to install procedures where no PTC is present; modify existing regulations to include the number of crewmembers required in the cab of the locomotive and use the data regarding the number of crewmembers in the controlling cab of the train at the time of an accident to evaluate safety adequacy of current crew size regulations; and conduct research to evaluate the causes of passenger injuries and evaluate methods for mitigating those injuries such as the use of seat belts and implement any findings.

The NTSB recommended to Amtrak that they incorporate training strategies for operating crewmembers and new hires to recognize and effectively manage multiple concurrent tasks in prolonged, atypical situations.

Click here to read a summary of the NTSB’s findings.

Click here to read the presentation given by the NTSB.

On Friday, April 8, Amtrak filed a lawsuit against Cimarron Crossing Feeders, LLC, claiming “gross negligence” as the alleged cause of a derailment last month that left 32 passengers injured. The National Transportation Safety Board (NTSB) found in their investigation that one of the feed company’s trucks had struck the side of the railroad trucks, shifting the alignment of the tracks. The lawsuit alleges that Cimarron Crossing Feeders failed to notify BNSF, the owner of the tracks, or Amtrak, of the damage. Click here to read more from The Hutchinson News. Click here to read SMART TD’s March 14 report on the derailment.