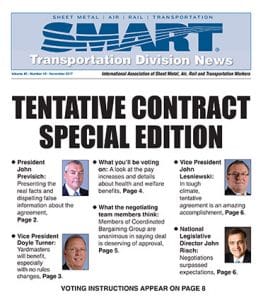 Don’t joke with Metra Assistant Conductor Don Kiesgen that all he does is “take tickets and open doors.”

It’s nothing he hasn’t heard from his family already.

Sure, the Metra veteran handles those two jobs.

Conductors Don Kiesgen and David Lorentz are members of Local 281 in Milwaukee.

LISBON, N.Y. — A Lisbon Central School graduate is living his dream of working as a railroad conductor at age 19.

Matthew House, a 2013 graduate of LCS, is now conducting trains in Kansas City.

House has been fascinated by trains since age three and even formed a model train club while attending school in Lisbon. He said working on the railroad was something he had always hoped to do and it’s hard for him to believe he has already achieved that goal.

NILES, Mich. – The man accused of stabbing four people on an Amtrak train told police that it started after a man he was talking to on the train “turned into a demon and he had to fight them,” according to court documents obtained by 24 Hour News 8.

“Michael Williams said he did not remember exactly what he did but that he did have a knife in his hand,” according to an affidavit for his arrest.

Four people were stabbed, including a conductor, on an Amtrak train tonight (Dec. 5) and a suspect was taken into custody, police said.

The stabbing occurred about 7 p.m. in Niles, Mich.

A SMART Transportation Division member was killed on the job Wednesday (Oct. 9) afternoon in a railroad switching accident at a Colorado Springs, Colo., industrial complex.

According to media reports, BNSF Railway conductor Dawn Trettenero, 42, was trapped between two rail cars. Firefighters told Television Station KKTV that they arrived within minutes of being notified of the accident, but Trettenero was already dead when they arrived.

“There were other employees present when this occurred, so we have witnesses that we are talking to,” said police spokesperson Lt. Catherine Buckley.

Local 202 Chairperson Brent Conlin reports that a memorial service for Trettenero will be held from 2-4 p.m., Wednesday Oct. 15, at Olinger Crown Hill Mortuary and Cemetery. It is located at 7777 W. 29th Ave. in Wheatridge, Colo.

WASHINGTON — How many people does it take to safely operate a freight train?

Two, say railroad labor unions, the Federal Railroad Administration and some members of Congress, arguing that having just one person in the cab of a locomotive was unsafe. They cite a series of deadly accidents involving trains with a solo engineer, including last year’s disaster in Lac-Megantic, Quebec, where 47 people were killed after an oil train jumped the tracks.

One, argues the railroad industry, which counters that there’s no data to prove multiple-person crews are safer.

Read the complete story at The Fresno Bee.

SMART Transportation Division member and conductor Roderick A. Hayes, 31, and engineer Chance Gober, 40, were both killed on the southbound train, according to a report by the Arkansas Democrat-Gazette.

Details on the conditions of Jeffery and Zompakos are not yet available.

Sometimes, when a train bears down on a person who has gotten onto the rails, his eyes meet the engineer’s just before impact.

“We have fatalities where people just lay themselves on the tracks, and they could be possibly staring right up at you,” said Anthony Bottalico, 58, a union official who began working as a conductor 38 years ago.

Read the complete story at LoHud.com.

CLINTON, Utah – A simple act of kindness is something a 12-year-old boy with an autism spectrum disorder is going to remember for the rest of his life.

“I don’t know how it started, but he just absolutely loves them,” Aaron Mancil, Matthew’s father, said.

Read the complete story at the Deseret News.

(Do you know who this conductor is? Email us at news_TD@smart-union.org.)

PHILADELPHIA – A CBS 3 I-Team investigation reveals the dangers when cars and people wind up in the path of trains along SEPTA’s Regional Rail Lines.

Eyewitness News Reporter Walt Hunter spoke exclusively with a veteran engineer and conductor who tell of the horrifying moments when wrecks happen.

OCALA, Fla. – Ocala Police are searching for whoever robbed a freight train this week. The crime sent the train’s conductor to the hospital. Now the railroad company is offering a reward for the robber’s capture.

People at the Ocala Laundromat where train tracks run underneath the Highway 200 overpass, couldn’t believe the crime that happened there early Tuesday morning. Like something out of the “Old West”, someone robbed the train.