Ohio State Senators Kenny Yuko (D) and Michael Skindell (D) are leading the effort to make Ohio railroads safer for crews and communities. The following three railroad legislative initiatives are scheduled for a first hearing Thursday, May 4 at 9:00 am at the Ohio Statehouse in Columbus. Hearings are open to the public.

Click on the following three senate bills to support the legislative efforts introduced by Sens. Yuko and Skindell:

Ohio Senate Bill 74 – Two Person Crews on all Freight Trains: A minimum of two crew members on all freight trains operating in Ohio.

Ohio Senate Bill 89 – Rail Yard Lighting: To establish standard for lighting in a rail yard; and to establish penalties for railroad companies that are in violation of those standards.

Ohio Senate Bill 90 – Use of Walkway Stone in Rail Yards: Establish standards for walkways in rail yards; and to establish penalties for railroad companies that are in violation of those standards.

Take another minute to ask your federal representatives to support H.R. 233, the Safe Freight Act, which would mandate a minimum of two-person crews on all freight trains operating anywhere in the U.S.

Recently, I was the only labor participant in a technology roundtable before the U.S. House Committee on Transportation and Infrastructure where we discussed emerging technology in the railroad industry.

The focus of my comments was on Electronically Controlled Pneumatic (ECP) Brakes. I have operated trains with ECP brakes and they are the greatest safety advancement I have seen in my 40 years in the railroad industry. They slow and stop trains up to 70 percent faster than conventional brakes and are the safest most advanced train braking system in the world.

Below is my Top 11 list (which is even better than a Top 10 list) on why ECP brakes are better than conventional air brakes:

1. ECP brakes maintain a train’s brake pipe pressure 100 percent of the time, conventional brakes do not. The colder the weather, the thinner the air, the more crucial maintaining brake pressure is.

3. When the engineer makes an emergency application of the brakes, every car with ECP brakes applies 100 percent of the time. This is not always true with conventional brakes.

4. ECP brakes would have prevented the terrible Lac-Megantic oil train tragedy that killed 47 people and destroyed the town, a factor cited in Transport Canada’s report on the accident. These brakes would have prevented the accident, because when air pressure on a car equipped with ECP brakes drops below 50 psi, the car automatically goes into emergency mode. So even an improperly secured train will not roll away.

5. ECP brakes allow the crew to monitor every car in the train in real time to determine if the brakes are applied or released. Conventional brakes do not.

6. ECP brakes record retrievable data associated with brake failures. There is no such review for conventional brakes. Trains are inspected every 1,000-1,800 miles and if the brakes are working during the inspection they continue on. If a car has brakes that fail to apply during that inspection, the car is taken to a repair facility. Often that facility is a heated shop where the car warms up, the brakes are tested and if they work at that point, the car is not repaired, rather, the car is placed back in the train.

7. ECP brakes all but eliminate in-train forces because all the cars apply and release at once. Conventional brakes cause lots of in-train forces, some of which damage merchandise and even cause derailments.

8. ECP brakes cause all cars to brake evenly, which dramatically reduces damage to wheels and brake shoes, saving a great deal of money in maintenance and repair. Conventional brakes do not. The modest cost of installing ECP brakes, about $3,000 per car on a new DOT 117 tank car that costs $144,000 to build, and about $60,000 per locomotive, will be more than paid for in the savings in car repairs, let alone reduced train derailments.

9. ECP brakes can be modified to apply hand brakes to a railcar automatically from the locomotive, allowing the crew to apply a hand brake on every car in the train in seconds. Conventional brakes must be applied by hand and it can take an hour or more to properly secure a train.

10. ECP brakes are required by the AAR for the movement of nuclear waste trains because they are the safest braking system available.

11. ECP brakes can be modified and will evolve to do everything that sophisticated wayside train detectors do now, and will do it constantly in real time, eventually eliminating the need for wayside detectors.

So, for the safety of rail workers, passengers and the residents in the cities and towns that trains run through, it is vital ECP brakes be phased-in in the freight rail industry. 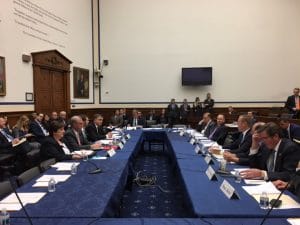 “Thank you Chairman Schuster, Subcommittee Chair Denham, and Ranking Member Capuano for inviting me to the roundtable discussion on emerging railroad technologies. With nearly 40 years in the railroad industry, I was pleased to have the opportunity to discuss the importance of maintaining minimum crew sizes, implementing Positive Train Control (PTC), and most importantly investing in the installation of Electronic Controlled Pneumatic (ECP) brakes, which are vital to safety of our railroads,” said John Risch, SMART-TD National Legislative Director.

“I look forward to working with the members of the committee to improve railroad safety as we discuss opportunities to strengthen our nation’s infrastructure,” Risch continued.

Click here to read Risch’s complete notes from the hearing.

Click here for information on participants and to view video.

RUGBY, N.D. – A 25-foot wall of snow stopped an eastbound Amtrak train in its tracks for twelve hours. Fortunately, no one was injured. Passenger services aboard the train remained operational, making the long wait more bearable. Read more from Bismarcktribune.com here.

According to 6abc.com, a SEPTA commuter train collision in Upper Darby, Penn. resulted in four injuries, including the train engineer, who was reported to be in critical condition. Names of the injured have not been released; NTSB investigators are on site. Read the complete story here.

U.S. Senator Chuck Schumer (D-NY) is asking the Dept. of Homeland Security to “immediately step in to enforce a recommendation” made years ago to screen mass transit employees against federal terror watch lists.  Read the complete article from abcnews.go.com.

In light of the deadly NJT September 29th transit crash in Hoboken, NJ, that killed one person and injured more than 100, U.S. Senator Cory Booker, the top-ranking Democrat on the U.S. Senate subcommittee that oversees passenger rail safety, and U.S. Senator Bob Menendez, the top-ranking Democrat on the U.S. Senate mass transit subcommittee, submitted a letter to U.S. Department of Transportation (DOT) Secretary Anthony Foxx , calling for DOT to investigate the long list of safety violations, accidents and apparent systemic failures that have plagued the  NJT in recent years. The NTSB is currently investigation the crash. Read the complete article posted in NJ.com, here.

The Times-Herald RecordOnline reported that on October 21, 2016, a joint state and federal legislative commission will begin hearings with New Jersey Transit (NJT) administrators in the wake of the September 29 Hoboken, NJ transit crash that injured more than one hundred and killed Fabiola Bittar de Kroon, a young mother and lawyer who had recently moved to New Jersey with her husband and one-year-old daughter. Read the complete article here.

One of two Long Island Rail Road (LIRR) commuter lines reopened this morning following the crash that occurred Saturday night when a commuter train sideswiped a work train that was blocking the track.  Read the complete story from NYDailyNews.com.

According to a CNN report, a Long Island, N.Y. commuter train heading eastbound collided with part of a work train that was blocking the track. National Transportation Safety Board (NTSB) officials are investigating the crash. Read the full story here.

ABC News.com reported that following last week’s deadly New Jersey Transit crash in Hoboken that killed a woman standing on the platform and injured more than 100 commuters, NJT announced a new mandate that requires the presence of both the engineer and a conductor during the final phase of the commute, when the trains are pulling into NJT’s Hoboken or Atlantic City stations.  Read the complete article here.