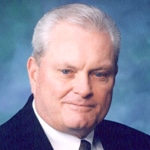 Little was the fifth president of the UTU, elected at the union’s seventh quadrennial convention in 1995 and re-elected in 1999. He served from Jan. 1, 1996, until his retirement in 2001.

Little began his railroading career with Houston Belt & Terminal Railroad Company in 1955. He became interested in union affairs and was elected local secretary & treasurer of Local 1524 in Houston in 1973. He was elected general chairperson of HB&T General Committee of Adjustment GO 425 in 1979.

In 1991, he was elected to the office of general secretary & treasurer, serving under then International President G. Thomas DuBose.

During his tenure with the UTU, Little also held the offices of alternate delegate and delegate and served as labor co-director of the Houston Terminal Project.

Services are pending near Little’s home in Leander, Texas.