One afternoon during the summer of 2000, her first year as a bus driver in Oregon’s Portland, Hope Okazaki had a troubling episode of gastrointestinal distress while on the job. She had just finished an almost two-hour tour through the east side of town, and her bus was parked at the Gateway Transit Center, in a lot across from Fred Meyer, a local grocery store and retailer.

“I was so embarrassed,” says Okazaki, who is now 53. “I bought underwear at Fred Meyer, then walked through the store to the restroom and changed my underwear, but I still smelled bad, you know, because I couldn’t get a shower.”

Read the complete story at the International Business Times.

“Those that we entrust to protect and serve our nation deserve opportunities that utilize the skills and training they received on the job on military bases overseas and at home,” said U.S. Transportation Secretary Anthony Foxx. “We can think of none more appropriate to safeguard our highways as commercial vehicle drivers than the thousands of veterans who have already proven they can safely handle large vehicles under extremely stressful circumstances.”

“These unique grants are designed to help recruit, train and place veterans and their spouses in good jobs that are in high demand and in an industry that is vitally important in keeping our national economy moving forward,” said FMCSA Acting Administrator Scott Darling. “Graduates of these training programs are continuing to serve our nation by ensuring that the goods and products we depend on are delivered professionally, efficiently and, most importantly, safely.”

The 2014 FMCSA grants announced today will provide training for nearly 400 new students. The awards were made to the following organizations:

In July 2014, FMCSA announced that the Military Skills Test Waiver Program had been expanded to include all 50 states and the District of Columbia. Under this program, state licensing agencies have authority to waive the skills test portion of the CDL application for active duty or recently separated veterans who possess at least two years of safe driving experience operating a military truck or bus. Waiving the skills test expedites the civilian commercial drivers licensing application process and reduces expenses for qualified individuals and operating costs to state licensing agencies.

To learn more about the U.S. Department of Transportation’s dedication to our nation’s veterans, please visit http://www.dot.gov/veteranstransportationcareers.

Another 22,500 medical professionals have also initiated the process for gaining their certification. All interstate commercial truck and bus drivers must pass a USDOT medical examination at least once every two years in order to obtain a valid medical certificate and maintain their commercial driver’s license (CDL).

As required by federal regulation, effective May 21, 2014, all new USDOT medical examinations for interstate truck and bus drivers (both CDL and non-CDL drivers) are required to be performed by a medical examiner who has completed the required training and passed a certification test.

The USDOT medical examination looks at a range of conditions to assess a driver’s ability to safely operate a commercial vehicle, including cardiovascular disease, respiratory and muscular functions, vision, and hearing. To meet the needs of professional drivers throughout the country, there are certified examiners in every state, and dozens or hundreds in most cities that can be located by visiting http://nrcme.fmcsa.dot.gov/.

WASHINGTON – The U.S. Department of Transportation’s Federal Motor Carrier Safety Administration (FMCSA) is reminding interstate truck and bus drivers that beginning May 21, all new USDOT physicals must be performed by a qualified health professional listed on the National Registry of Certified Medical Examiners.

“Safety is our highest priority and it is vital that every commercial truck and bus driver be qualified, alert, and focused when they are behind the wheel,” said Secretary Anthony Foxx. “Medical examiners equipped with a thorough understanding of DOT fitness standards will be able to ensure that commercial drivers meet the health requirements necessary to operate on our highways and roads, thereby strengthening safety for every traveler.”

The new program, which was required by federal law and addresses four National Transportation Safety Board recommendations, sets baseline training and testing standards for medical professionals who perform commercial driver physicals and for tracking of driver medical certificates.

Today, approximately 22,000 medical professionals have completed the coursework and testing and are listed on the National Registry and another 27,000 have begun the certification process. Current medical certificates held by commercial driver’s license (CDL) holders will continue to be valid until the expiration date that is shown on the card. Only then will the driver need to seek a certified medical examiner to perform their new examination.

“We have certified thousands of health professionals to conduct driver exams – with more being added every day,” said Federal Motor Carrier Safety Administrator Anne S. Ferro. “The online database is easily searchable so drivers can schedule their medical certification exam with a qualified healthcare professional wherever they might be – coast to coast, including Hawaii and Alaska.”

A USDOT medical exam looks at a range of conditions to assess a driver’s ability to safely operate a commercial vehicle, including cardiovascular disease, respiratory and muscular functions, vision, and hearing.

All interstate commercial truck and bus drivers must pass a USDOT medical examination at least every two years in order to obtain a valid medical certificate, maintain their CDL, and legally operate a commercial motor vehicle.

Medical examiners on the National Registry will also be required to maintain and demonstrate competence through periodic training and recertification testing and those that fail to maintain federal standards will be removed.

The (New York) Senate has passed a bill that would prohibit registered sex offenders from working as bus drivers.

The bill (S.1519) would stop the Department of Motor Vehicles from issuing or renewing a commercial driver’s license to operate a passenger or school bus to anyone who is a registered sex offender.

Read the complete story at The Legislative Gazette. 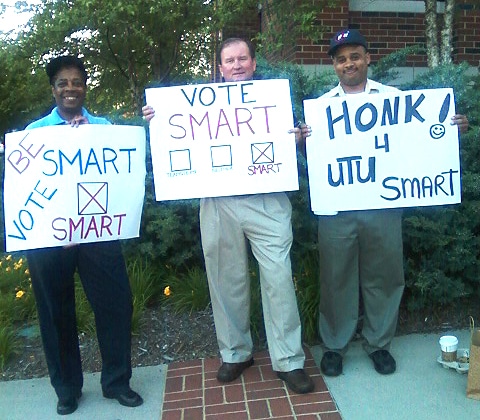 There is no question that more must be done to protect bus operators.

When operating a motor coach — whether carrying students, commuters, tourists or the handicapped – whenever we open the door, we are exposed to assaults.

Just in recent weeks, a driver in Utah was injured by a passenger who attacked him and caused the bus to crash. In Chicago, a driver was hospitalized in serious condition after being struck by a customer in a fare dispute. Almost daily, school bus operators must deal with abusive and unruly students.

Some employers are installing Plexiglas safety shields to protect drivers, and video cameras are being installed in buses and in bus terminals to record unruly behavior and threats.

In New Jersey, the state legislature passed a bill imposing severe punishment for anyone assaulting a bus operator or rail employee, and the law is proving to be effective. Coach USA has taken a further step and posted notices in its buses in New Jersey warning of the severe penalties for assaulting bus operators.

Our UTU National Legislative Office and many state legislative directors are working with lawmakers, many of whom are eager to craft legislation imposing penalties on those who assault drivers, and to require driver training in how to deal with unruly and abusive riders.

Within the UTU, from the local level to the International, we have qualified officers and staff working each day to help improve workplace safety.

Each of our bus locals should be working with state legislative directors to provide examples of the problem and suggestions for solutions, which should be communicated to lawmakers.