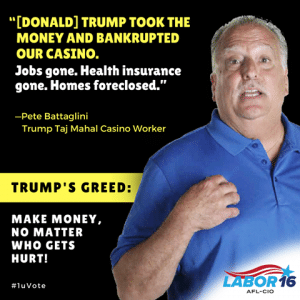 Trump is no friend to working people, despite spouting a few ideas stolen from Bernie Sanders. Trump has said American workers make too much money. All the products with the Trump name on them come from overseas sweatshops.

The Trump cartel recently paid a “union avoidance” firm a half-million dollars to keep a union out of their Las Vegas casino hotel. When the workers voted the union in anyway, the company refused to recognize the vote. Trump, like all Republicans, supports a national right-to-work law, which would severely weaken union strength, like it already has in states that have such laws. This would likely affect railroad workers also, now presently exempt from such state legislation under the Railway Labor Act. Railroad employees are among the last industrial workers in the USA that still receive a living wage — because they’re still unionized.

The present hoopla over Trump is much

like the Reagan Revolution of 1980. Reagan told working people he was their friend, then proceeded to steamroll over worker’s rights, encouraging companies to juggle their books into bankruptcy to void union contracts.  He twice tried to eliminate Railroad Retirement. Only a Democratic Congress prevented him from doing so. By the end of his second term in 1988, union power had been eviscerated.

And since Trump wants to start World War III, how come he dodged the draft? Many of us had deferments, like he did, but when ours expired we were on a bus to an Army induction center, including many of us who were married. Some of the loudest “patriots,” like Trump, John Wayne, the NRA’s Wayne LaPierre or any of the hosts on Fox News have had one thing in common — they avoided military service.

A Trump Presidency, with a Republican Congress, would see the greatest onslaught on workers’ wages and rights in over 100 years. While Bernie Sanders would have been the greatest champion for working people, Hillary will at least not try to destroy the rights that workers have taken so many decades to achieve. Union workers should give her their support.