A workers summit for union members from all over Nebraska is scheduled to take place on Monday, May 6 in North Platte, Nebraska.

Jim “Doc” Moore, a retired associate professor of labor history at Cornell University’s School for Industrial and Labor Relations, will moderate the meetings at 1 and 5 p.m. at the Ramada Inn and Suites, 2102 S. Jeffers St., North Platte, NE 69101.

Among scheduled presenters at the summit, which is open to all union members and their spouses, are Sue Martin, president of the Nebraska AFL-CIO; John Kretzschmar, director of the William Brennan Institute for Labor Studies at the University of Nebraska at Omaha; and SMART TD Nebraska State Legislative Director Bob Borgeson.

The summit is again being organized by Terry Sigler, a retired legislative representative of SMART TD Local 286 in North Platte who remains active in union matters, especially when it comes to safety. Among topics discussed at the successful inaugural meeting in April 2018 were the state’s two-person crew bills and OSHA funding.

“The purpose of the Workers Summit is to unite all the unions to better inform the membership of the issues that are important for their safety and welfare,” Sigler said.

Nebraska State Legislative Director Bob Borgeson invites TD members in his state to come out to Omaha and participate in Labor Day events Sunday and Monday. 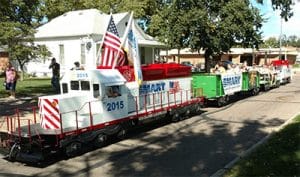 On Sunday, Sept. 2, dinner and speakers will kick off the annual Labor Day Eve feed 5:30 p.m. at the SMART Union Hall, 3333 S. 24th St. in Omaha, where parade shirts will be distributed.

Monday will continue the two-decade-plus tradition of marching in the Omaha parade. Lineup is at 9 a.m. at a location that will be determined. The parade begins at 10 a.m. A refreshment tent, courtesy of Hunegs, LeNeave and Kvas law firm, will be available for participants at the parade’s conclusion.

If a local wishes to contribute to help offset the costs of putting on these events, please make a check out to SMART TD NSLB LO-030, Borgeson said.

Union members from all over Nebraska are invited to attend a Workers Summit on Friday, April 6 in North Platte, Neb.

Jim “Doc” Moore, a retired associate professor of labor history at Cornell University’s School for Industrial and Labor Relations, will moderate the meetings at 1 and 5 p.m. at the Quality Inn and Suites, 2102 S. Jeffers St., North Platte, NE 69101.

“The purpose of the labor summit is to unite all the unions and to better inform our members of the issues that are important for our safety and welfare,” said summit organizer Terry Sigler, a retired legislative representative of SMART Transportation Division Local 286 in North Platte.

Topics of discussion will include S. 1451 – the Railroad Advancement of Innovation and Leadership with Safety Act; S. 2360 and HR 233 – the Senate and House versions of the Safe Freight Act and cuts to the Occupational Safety and Health Administration’s budget.

Strategies about how to mobilize to have union workers’ voices heard will be discussed, and questions from attendees are welcome during the discussion.

“Because of the potential catastrophic tragedy that would result from a train accident of any nature, having two sets of eyes is a minimum safety requirement,” said Bob Borgeson, the state legislative director of the Sheet Metal, Air, Rail and Transportation (SMART) Union, which commissioned the poll.

Read the complete story at the Omaha World-Herald.

Legislation requiring two-person railroad crews in the states of Nebraska and Wyoming have been introduced in the respective state legislatures.

The bill introduces fines of $100 for the first offense, $250 for the second offense within three years, and $500 for all subsequent offenses committed by a rail management within a three-year period.

Wyoming State Legislative Director Stan Blake reports that Senate File S.F. 0076, an act requiring freight trains in the state to be operated by a crew of not less than two persons, has been introduced in the Wyoming Legislature by three state senators and a state representative.

If passed, the legislation would take effect July 1, 2015.

The festivities begin Sunday at 5 p.m., when the board will hold a “membership feed” at the Sheet Metal Workers’ Hall at 3333 S. 24th St.

Parade participants will assemble at 9 a.m. on Sept. 1 at 16th and Webster Sts. for the 10 a.m. march through Omaha.

As in past years, there will be mini trains and the SMART TD caboose for children to ride upon.

“Come on out and walk the parade route with your fellow members of the SMART family,” Nebraska State Legislative Director Bob Borgeson said. “I am sure SMART General President Joe Nigro will join us as he did last year.”

Those events are just the beginning of the fun. The city will be celebrating its Septemberfest over the weekend and there should be a variety of events available to entertain members and their families. 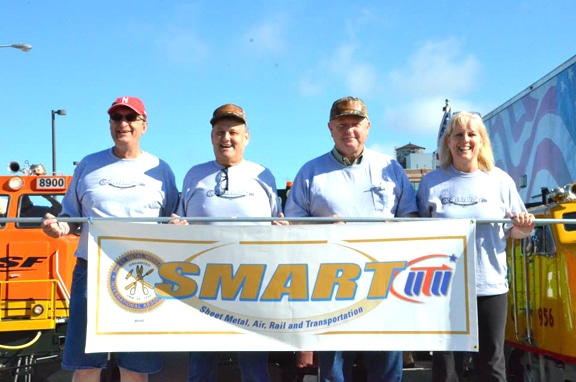 The event kicks off with a “membership feed” Sept. 1 at 6 p.m. Members who show up will receive a T-shirt to wear for the parade. The Labor Day parade will be held Sept. 2 and line-up to walk in the parade is at 9 a.m. at 16th and Webster Streets. There will be mini-trains and a SMART TD caboose for children to ride on.

Members can view the UTU in the parade from the past four years by going to YouTube and searching “UTU Labor Day.”

Borgeson encourages all SMART members in the Omaha area from both the transportation and sheet metal divisions to attend. For more information, contact him at (402) 679-0872, or email him at smartdirector@cox.net.