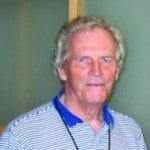 Beebe served more than 60 years as a union representative to the Brotherhood of Railroad Trainmen (BRT), the United Transportation Union (UTU) and the SMART Transportation Division.

A member of Local 1361 in New Haven, Conn., and an active participant in the unification movement that led to the establishment of the UTU, Beebe was born Jan. 15, 1929. He joined the U.S. Army in 1946, and later attended college at the University of South Florida and at Southern Connecticut State University, where he earned a bachelor’s degree and a teaching certificate. He was an avid handball player at the New Haven YMCA, and played tennis into his seventies. He was also a minor league pitcher in the Drummond Baseball League during the early 1950s.

Beebe hired out in 1951 with the New York, New Haven and Hartford Railroad in the mail and baggage department. On May 29, 1953, he transferred into operations as a brakeman, joining BRT Lodge 937 (now SMART Transportation Division Local 1361) on Aug. 1, 1953.

In 1983, Beebe led UTU-represented Metro North Railroad employees through a six-week strike that resulted in a groundbreaking agreement that became the benchmark for commuter rail contracts, an agreement that SMART Transportation Division members benefit from to this day. In addition to serving as general chairperson and Local 1361 delegate and trustee, Beebe was elected as Connecticut state legislative director in 2005, a position he held until his death.

Beebe was known to keep the most current union contract with him at all times, in the event that someone asked about contractual provisions.

Beebe’s wife, Felicia, died in 2001. He was predeceased by his brothers, Phillip, Earl and Norman; a sister, Eila Talbot; and parents Earl and Margaret (Lewis) Beebe. He’s survived by his daughter, Suzanne Griffiths; her husband Owen; two granddaughters, Celeste and Carys Griffiths and many nieces and nephews.

To be described as a “classic” means that one is considered to be of the highest quality with lasting value; an authoritative standard; fashionable, with simplicity and restraint in style; one of a kind. Like the classic ‘57 Chevy or the fashionable Elvis Presley, SMART General Chairperson William A. Beebe is a classic in his own right.

Amtrak GO 663 General Chairperson Beebe is a classic railroad union man who has withstood the test of time. On Jan. 1, he will have completed 60 years of service as a union representative to the Brotherhood of Railroad Trainmen, the former UTU, and now the SMART Transportation Division. More amazingly, Beebe will turn 86 years young in January and shows no signs of slowing down. Throughout those 60 years, the membership has been his top priority.

GO 663 Vice General Chairperson Gary J. Hopson offered highlights of Beebe’s union career. Beebe has been a delegate to every national convention since the creation of the UTU. He has witnessed, firsthand, the evolution of this union and has often been described as the union’s resident historian. Hopson said Beebe was an active participant in the formation of the UTU.

According to Local 227 (Hartford, Conn.) Chairperson Francis L. Ariola, Beebe proudly served in the U.S. Army, beginning in 1946. He later attended college at the University of South Florida and Southern Connecticut State University, where he earned both a bachelor’s degree and teaching certificate.

In 1983, Beebe led UTU-represented Metro North Railroad employees through a six-week strike that resulted in a ground-breaking agreement that has become the benchmark for commuter rail contracts. SMART TD members still benefit from that agreement today, Hopson said. “Now, our committee handles our own contract negotiations with Amtrak with minimal national involvement by the International. Beebe’s 1983 agreement opened the door to this.”

In addition to serving as general chairperson, Local 1361 delegate and trustee, Beebe is again the Connecticut state legislative director. He maintains a rigorous caseload and there are no indications that retirement will ever even be a consideration of his, Ariola said.

So how does Beebe keep it all going? According to Ariola, Beebe makes a concerted effort to stay healthy through physical fitness, diet and rest. “He is very health-conscious and works out every day, and has even been known to beat racquetball opponents 30 years his junior.”

Hopson provides more evidence, explaining that, “Beebe was a renowned handball player at the New Haven YMCA, and played masterful tennis even into his seventies.” According to Ariola, Beebe was a successful minor league pitcher in the Drummond Baseball League during the early 1950s. He is also a family man and ensures that he is involved in his two granddaughters’ lives by frequently visiting his daughter Susan’s family in Oregon. “He just loves his grandkids and they love their grandpa,” Ariola said.

“As the union’s ‘resident historian,’ Bill has accumulated a lot of stuff over the years. He keeps the most current union contract with him at all times, in the very likely event that someone asks his opinion about some vague, but pertinent, contractual provision. Members are always asking for his thoughts on various provisions because they trust him as highly competent, knowledgeable and wise. The funny thing is that, he really doesn’t need it since he practically has it memorized.”

“As a union representative and as a man, Bill is fearless. The carriers know that he is a fighter and that he is never intimidated.”

As SMART embarks on another year, members can rest assured that Bill Beebe will continue to take care of business by representing them with the highest quality. Bill Beebe truly is a one-of-a-kind classic.

“In continuing contract talks with Amtrak, we are striving to obtain an equitable agreement for our members.

“Certification pay and the interpretation of single days continue to be the obstacles holding us up. I remain confident that with the efforts of our UTU negotiating team, we will be able to obtain an agreement that will be beneficial to the Amtrak members.”

Said Sampson: “We are continuing negotiations with Amtrak with a goal of obtaining an equitable agreement for our members. Certification and the interpretation of single days are important issues to Amtrak conductors and assistant conductors.

“With the continued efforts of both the general committees, and the assistance of International Vice President John Previsich, we will obain an equitable agreement.”

Sampson said the next negotiating session with Amtrak is tentatively scheduled for July 22.