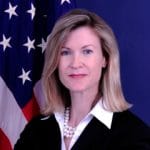 President Donald J. Trump has appointed Ann Begeman to serve as Acting Chairman of the Surface Transportation Board (STB). Begeman is currently serving a second, five-year term as a Member of the Board following her recent nomination by President Barack Obama Dec. 7, 2016, and her unanimous confirmation by the U.S. Senate Dec. 9, 2016. Ann first joined the Board May 2, 2011. Her current term expires Dec. 31, 2020.

“It is an honor to serve the public on the Board, and I am grateful to President Trump for the opportunity to lead the agency at this time,” said Begeman. “I look forward to continuing the important mission of the STB in my new capacity as Acting Chairman, working with the new Administration, my fellow Board Members, Daniel Elliott and Deb Miller, our dedicated agency staff, and our important stakeholders. I also wish to recognize former Chairman Daniel Elliott for his service and leadership, and his sincere efforts to facilitate a smooth transition during the change in administrations.”

Prior to her 2011 appointment, Begeman held Senate staff positions on Capitol Hill for more than 20 years, playing a key role in the crafting of major transportation legislation, including the ICC Termination Act, which created the STB. She served as the Republican Staff Director for the Senate Committee on Commerce, Science, and Transportation under the leadership of U.S. Senator Kay Bailey Hutchison and as the Committee’s Deputy Staff Director and Transportation Policy Advisor under the leadership of U.S. Senator John McCain. Begeman has also served as Legislative Director and Acting Chief of Staff for Senator John McCain and as a Legislative Assistant for U.S. Senator Larry Pressler. She has also worked in the private sector, serving as a benefits specialist for First American Bankshares, Inc.

Begeman is a native of Humboldt, South Dakota. She earned a B.S. in business administration from the University of South Dakota.