SMART Transportation Division members out of Local 1626 were among the recipients of the Gold Spike award from Alaska Railroad in late January.

Members Benjamin Bowen, Ryan Diehl, Caitlin Elison, Joshua Robinson, Bryan Sooter and Steven Tennison were among those who received a team award for “a sustained level of excellent performance and team-driven professional development, which in turn, improved train transportation performance.” 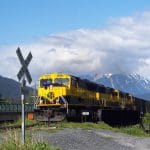