A statement from SMART-TD President Jeremy R. Ferguson on the passing of AFL-CIO President Richard Trumka:

“Brother Trumka was a distinguished, energetic and passionate leader — a true force whose presence will be missed by all who knew and worked with him in advancing the solidarity and selflessness that propels the American labor movement. We share in the sorrow of his passing and mourn with our brothers and sisters in labor. SMART-TD extends our most heartfelt condolences and will continue his legacy of standing up for the working class.“

Trumka was a keynote speaker at the 2019 SMART General Convention. Click below to view a highlight from his address to more than 1200 convention delegates. 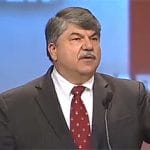