State of the Unions: How Labor Can Strengthen the Middle Class, Improve Our Economy, and Regain Political Influence 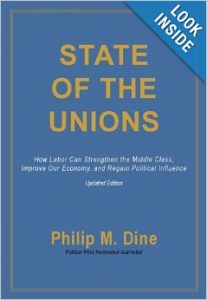 State of the Unions is an excellent and very readable analysis of the current struggles and past triumphs of the American labor movement. Longtime respected labor reporter Phil Dine makes a compelling case that a much stronger labor movement  is integral to any effort to restore fairness for working families and reduce America’s widening income gap.

Dine takes a look at what happened to organized labor in America and what can be done to restore it to its role of the defender of middle-class values and economic well-being.

Dine offers firsthand accounts of the union members striving to make their voices heard in a political landscape increasingly shaped by corporate interests, including how:

A reporter who has covered labor for two decades, Dine not only details where labor has gone wrong, but he also offers ideas on how it can adapt to a global economy to recover the ground it lost over the last quarter century.  His book also has been updated to cove the latest assault on workers from Wisconsin to Ohio, to today’s current war in Pennsylvania and everywhere in between.

A link to purchase his book is available here.