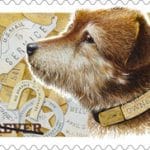 WASHINGTON — The Railway Mail Service is no more, but the pooch who, more than a century ago, served as a mascot and protector to those who sorted the mail aboard Railway Post Office (RPO) cars has gained new life in a special issue stamp of the U.S. Postal Service.

Owney is the dog’s name and his story is legend. And if the tail (whoops, “tale”) we are about to relate is a bit much to chase, recall the line from the movie, The Man Who Shot Liberty Valance: “When the legend becomes fact, print the legend.”

This we shall do.

Return with us now to the 1880s and Albany, N.Y., where postal clerks offered fare and lodging to a scruffy mutt – a mixed terrier in a more polite term — they named “Owney.” The pooch soon began following mail bags onto Railway Post Office (RPO) cars where he rode, slept and ate for 17 years while providing some degree of entertainment, and and a high degree safety, to postal clerks sorting the mail on the rails.

As we know, danger rode the rails in those days, and RPO employees were as likely to be killed in train wrecks as train and engine workers. Between 1890 and 1900, 80 mail clerks were killed and more than 2,000 injured in rail accidents, according to the National Postal Museum. But not a single RPO car on which Owney rode – and he is said to have ridden more than 140,000 miles on RPO cars throughout the nation — was involved in an accident.

RPO workers, aware of the dangers of the job and increasingly looking to Owney as a good-luck pooch, began festooning his collar with medals and other tags of endearment. When the postmaster general learned of the practice, he authorized a custom-made harness better able to accommodate the labels of endearment. It was said that when Owney moved about, his tributes jingled “like the bells on a junk wagon.”

Alas, Owney was a bit contrary and given to ill-temper when separated from RPO cars and the mail. As the story is told, when Owney encountered a newspaper reporter in Toledo, Ohio, in June 1897, things got a tad out of hand. While the circumstances have been blurred by time, Owney apparently “went postal” on the newsman and wound up dead of a bullet wound. Grief stricken mail clerks raised funds to have Owney’s remains preserved – and they remain on display today in the National Postal Museum in Washington, D.C.  (And you thought a stuffed Trigger — Roy Rogers’ horse — was unique.)

Indeed, a number of children’s books have been written about Owney. And the Owney stamp, issued by the Postal Service July 27, isn’t the end of fame for Owney — surely not in this age of technology.

The Postal Service says it intends to launch an Owney iPhone app as well as an Owney iPad interacative e-book. It is unlikely, however, that Owney’s fame might ever eclipse that of Winnie the Poo; then, again, who are we to quibble with legends?

As for the Railway Mail Service and RPO cars, when Amtrak took over railroad passenger service in 1971, only eight RPO routes remained. The last RPO car as taken out of service in 1977; and in 2004, Amtrak ceased hauling all U.S. mail.