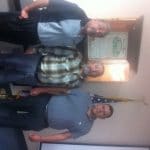 Organizing in Amarillo, Texas, has been a success thanks to the hard work of Charles Thomas, Sheet Metal Local 49 President, Vice President of Metal Trades of Amarillo, Texas, and 30-year Local 49 member. Brother Thomas has been an employees of the Pantex Nuclear Facility in Amarillo for over 13 years and currently holds the elected position of Vice President of the Metal Trades Council in that facility.

Thomas understands that certain employees in the facility are not represented by any union, and do not see raises on a regular basis. When the new company that took over the contract at Pantex passed on new health care increases to the unrepresented workers, this was the spark Brother Thomas needed to get authorization cards signed. After filing for an NLRB election for some 24 planners and schedulers, and three meetings later with the unit, Thomas went to the election and won.

Winning this election on August 6, 2014, has made the company quite nervous, as there are some 300 employees in this plant who are not represented. Charles Thomas and Local 49 are committed to organizing at Pantex, and Thomas has the full support of his Business Manager, Vince Alvarado, and Subsidized Organizer Isaiah Zemke, both of whom have made themselves available whenever needed.

At this writing Thomas has not yet negotiated a contract, as the company will not agree to a first meeting date. The entire Metal Trades contract expires in February 2015. According to Brother Alvardo, “We will continue to stand for what is right for these workers and will not rest until each and every one of them receives the representation they deserve.”