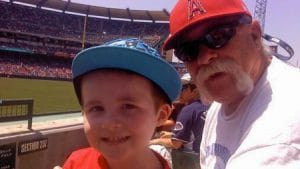 Brother Steele with one of his grandchildren.

On February 24, 2015, Glenn Steele, an engineer in Los Angeles, CA was involved in a horrible train accident that was no fault of his own. After departing Metrolink station in Oxnard, his train hit a truck that was left parked on the tracks. The conductor and his student engineer both sustained injuries but were released that day after receiving treatment. Brother Steele, on the other hand, was not so lucky and left us on March 3rd.

His friends, family and brothers and sisters at the BLET created a gofundme account to help his family in this terrible time of need.