The Shell Pennsylvania Petrochemicals Complex is an under-construction ethylene cracker plant in Monaca, Pa., 30 miles northwest of Pittsburgh. First proposed in 2012 during the Obama administration, the facility is owned and operated by Shell Oil Co., the North American arm of Royal Dutch Shell.

Shell began site work in 2015, moving 7.2 million cubic yards of dirt, building new bridges and a new rail line, and completing a total relocation of PA Route 18. Docking and bulkhead facilities to be used during construction were then created, with construction on the plant itself beginning in November 2017. Work on the plant is expected to continue through the early part of this decade. As of today, an average of 4,500 workers are constructing the colossal facility, with a peak of 8,000 at several points.

As of today, an average of 4,500 workers are constructing the colossal facility, with a peak of 8,000 at several points.

The site will have four processing units (three of which will be polyethelene crackers and one an ethane cracker) as well as a natural gas power plant to support both the plant and the local electric grid, a 900-foot-long (270 m) cooling tower, a rail system with over 3,000 freight cars, numerous loading facilities for both trains and trucks, a water treatment plant and an office building to oversee operations.

Over 200 union sheet metal workers, the majority of whom come from Sheet Metal Local 12 in Pittsburgh, have been on hand to construct the massive complex. Many have been performing lagging work on the complex, as well as duct and siding work. Signatory contactors on the project include Limbach, PA Roofing, Great Arrow Builders, Phoenix Roofing, API, Aescit, McKamish and Jamar Company. Much of this came thanks to an extensive training program performed at Local 12 with the assistance of the International Training Institute (ITI). 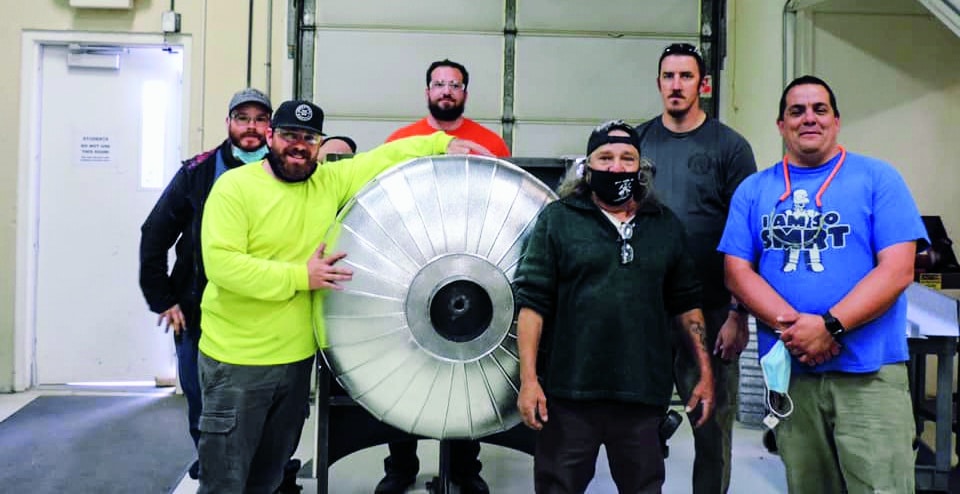 For those unfamiliar with lagging work, it is the finishing material (steel or aluminum) used to cover many types of insulation, especially on the numerous large insulated flat surfaces in a power plant or industrial facility. There are key difference between lagging, a traditional jurisdiction of SMART sheet metal workers, and insulation work. The latter is the act of installing insulation or state of being insulated.

Lagging is the finishing material (steel or aluminum) used to cover many types of insulation, especially on surfaces such as boiler walls, flues, ducts, precipitators, selective catalytic reduction systems, bag houses, wind boxes and fans, among other items. Also known as cladding or sheet metal, lagging ranges in thickness from .021-inch and up and usually does not include a vapor barrier. The installation of lagging material on a union project is the jurisdictional work of SMART sheet metal workers.

The installation of lagging material on a union project is the jurisdictional work of SMART sheet metal workers.

On June 1, 2019, SMART entered into a memorandum of agreement with the Heat Frost and Insulators International Union to promote growth and eliminate jurisdictional disputes between both unions for lagging work. To highlight the importance of this work, SMART General President Joseph Sellers and the SMART General Executive Council assigned an international representative and an international organizer to establish a business model to secure new lagging work, as well as meet with the Insulators Union to ensure enforcement of the agreement. In February 2021, to answer the call from General President Sellers to aggressively pursue new work opportunities in this area, over 73 SMART locals assigned personnel to lead their local lagging efforts. These personnel were trained on new online tracking systems to identify and secure new work. In addition, enhanced “Strike Force Training” modules from the International Training Institute (ITI) were established for lagging work, including detailed proofs, material lists and cut sheets for locals to use in their training. The ITI program can customize trainings to be versatile and jobsite-specific to meet the demand for any new work opportunity that presents itself.

With the growth in new power plant and industrial work across North America, the agreement provides substantial new work opportunities for union sheet metal workers in this growing sector of the sheet metal trade.

“This is a promising growth area within our industry,” said SMART SM Local 265 Business Representative Kevin Glass, “that will yield a tremendous number of work hours for our sisters and brothers working in the industry.”

General President Joseph Sellers underscored that the work is a high priority across the international union.

“This is work that belongs to the members of this union” said Sellers, “and it is time to capitalize on this work and secure these work hours for our members.”