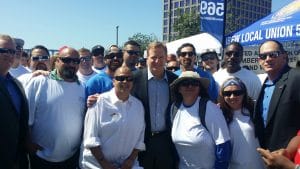 For years, the NFL and San Diego Chargers engaged the City of San Diego in talks about building a new football stadium. Recently, the Chargers approached the San Diego Building Trades to assist in overcoming some of the obstacles that had arisen in those talks.

Other NFL teams from the Patriots to the Cowboys have benefited from the highly skilled Building Trades, especially SMART sheet metal members, and the Chargers committed to a Project Labor Agreement (PLA) for a new stadium.

Sheet Metal Local 206 (San Diego) and the area Building Trades are helping to collect 67,000 signatures to put the project on the November ballot, with a $1.8 billion stadium and a convention center annex that would host major conventions and special events.

As Tracy put it, “partnering with the Chargers will provide a clear path to building a world-class, multi-use facility that will not only retain our football team, but ensure we keep major events such as Comic-Con and college bowl games that bring revenue back to our city while keeping members employed.”

“The hours this will provide SMART members while ensuring the city has a facility that serves as an economic driver for years to come will be a win-win for everyone involved,” Tracy added.