Retired member conducts, but with baton in hand

Every year the La Crosse Symphony Orchestra of La Crosse, Wis., chooses five people to represent them and go out to the public and collect donations for them in their “Conductor Wannabe” contest.

The two people that raise the most amount of money get to conduct a piece of their choosing.

This year, Ingalls won first place in the contest, with donations totaling over $9,000. The second place winner raised $6,400. In all, the contest brought in $23,464 for the orchestra.

The five volunteers are usually “celebrities” in the community. Ingalls was chosen because a lot of people in La Crosse knew him growing up in the community, working on the railroad and for all of his volunteer work with the orchestra.

Ingalls has been a volunteer for the orchestra for the past 15 years. His sister-in-law became executive director 15 years ago and got him to start volunteering, and he’s been volunteering his time ever since.

Ingalls is considered a “volunteer extraordinaire” for the orchestra as he volunteers for many different events, including the committee for the Valentine Ball, Rising Stars concert, Fourth of July free concert, and the Symphony for Youth, among many other events.

“I consider this a great honor to represent the volunteers of the past, present and future,” Ingalls said, when asked why he was in the contest.

Ingalls expressed that he wanted to win this competition for all the volunteers that give up their time and energy to bring the orchestra together and make events happen.

“My campaign was to drum up the small donation: $5, $10, $20 donations,” Ingalls said. His theme for the contest that helped him win was “help me be a conductor again.”

At first, he had reservations about being able to raise money, but it turned out to be an enjoyable experience.

He got to get out and walk the streets of La Crosse and talked to a lot of people and business owners.

Saturday, April 20, Ingalls conducted Aaron Copland’s Fanfare for the Common Man. When asked if he had a background in music, Ingalls mentioned that he played the cello throughout high school. 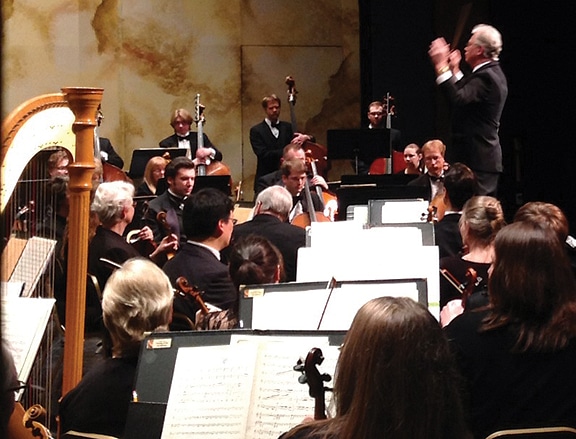