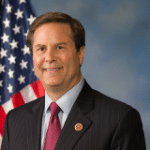 Washington, DC – April 28, Congressman Donald Norcross (D – N.J.) introduced his first bill, H.R. 2074, the Toxics by Rail Accountability and Community Knowledge (TRACK) Act, to improve hazmat-by-rail safety by implementing a series of recommendations made by the National Transportation Safety Board (NTSB) following the 2012 train derailment in Paulsboro, New Jersey. Since being sworn in to Congress in November of last year, Rep. Norcross has worked closely with Senator Bob Menendez and local officials on legislation designed to avoid catastrophes like the one that occurred in Paulsboro, while working to benefit from the lessons learned from this accident.

On November 20, 2012, a freight train derailed in Paulsboro, New Jersey, causing several tanker cars to crash and spill toxic vinyl chloride into the atmosphere. Thanks to the efforts of the local first responders, State Office of Emergency Management, U.S. Coast guard, and countless others, the risk of injury was minimized. However, an estimated 1,500 people were forced to evacuate their homes.

In the wake of the accident, the NTSB conducted an independent investigation into the cause of the derailment and toxic chemical spill. The legislation introduced by Rep. Norcross addresses a number of the public safety concerns raised by the NTSB, while working to implement their recommendations into law.

“As Representatives in Congress, our top duty is to ensure the safety and security of our residents, which is why I have chosen to pursue these common-sense rail safety reforms in my very first piece of legislation,” said Congressman Norcross. “Following the 2012 train derailment in Paulsboro and other preventable public safety emergencies, we must ensure that rail users take steps to minimize the risk of an accident and provide recourse to those affected when companies fail to do so. These NTSB-supported recommendations will improve rail safety and expand protections for first responders and residents who live along train routes.”

“After years of study, the NTSB found that Conrail’s actions after the Paulsboro derailment endangered the train crew, local residents and first responders.  But, the report also gave us a roadmap for how to improve the safety of shipping hazardous materials by rail—and this bill turns those recommendations into action,” said Sen. Menendez, who introduced the companion bill in the Senate.  “No legislation can change the events of that day, or fully bring back peace of mind to the residents of Paulsboro, but I hope this legislation can be one step towards righting the wrongs that occurred and to forcing the railroads that operate in our communities to put public safety at the forefront.”

The TRACK Act will: