In the face of an NBC News/Wall Street Journal poll showing 62 percent of Americans oppose revoking collective-bargaining rights for public employees, the Ohio Senate March 2 moved to repeal the core of those rights for Ohio state employees.

The New York Times reports the measure will clear the Ohio House of Representatives — having a sizeable Republican majority — and that Ohio Republican Gov. John Kasich will sign the bill.

The newspaper calls the action nothing less “than a near complete dismantling of public-worker protections that have been in place in Ohio since 1983.”

In a close vote, the Ohio Senate voted 17-16 in favor of passage — with six Republicans joining all Democrats in opposing the measure.

The bill outlaws strikes for any public employee, removes health care insurance from any form of bargaining, eliminates binding arbitration for law enforcement and firefighters, and establishes, for all Ohio public employees, fact-finding bodies to make recommendations that, if rejected, allow a school board, city council or legislature to impose its own last/best offer.

In other words, the employer gets to determine the outcome of negotiations.

The president of the Fraternal Order of Police told the Columbus Dispatch newspaper that the bill “ensures that no employer has any reason to bargain in good faith … because they get to dictate the terms at the end.”

UTU members — and many UTU International headquarters staff in North Olmsted, Ohio, who belong to the Office and Professional Employees International Union — joined thousands of union and non-union workers over the past two weeks demonstrating against the measure outside the Ohio legislature in Columbus.

While the NBC/Wall Street Journal poll also showed that a majority of Americans support public employees paying more for health care and retirement benefits, public-employee unions in Ohio and other states already have indicated a willingness to grant states concessions, belying allegations of those Republican-controlled state legislatures and their Republican governors that they want merely to balance state budgets.

Union busting clearly is the intent. Ohio Democrats say they will push for a voter-referendum to repeal the bill.

Somewhat troubling in the poll is that Americans’ perception of private-sector and public-sector labor unions is lukewarm — with just 38 percent of respondents indicating a “positive” or “somewhat positive” impression of both private-sector and public-sector unions; and an almost equal number having a “somewhat negative” or “very negative” impression of labor unions.

The assault on public-employee collective bargaining continues in Indiana and Wisconsin.

The New York Times reports that in Wisconsin, “a standoff over legislation that would cut collective bargaining rights for public employees intensified. Democrats in the state Senate, who left Wisconsin last month to prevent a vote from taking place, learned that the Republicans left behind were taking steps to start fining missing lawmakers $100 for each day they stay away.”

In Indiana, the Indianapolis Star newspaper reports that the standoff, where Democrats have left the state to block House Republicans from passing anti-union legislation, continues.

And in Arizona, where the legislature is considering 20 anti-union bills, the UTU’s State Legislative Director Greg Hynes spoke out after 59 Republican senators and house members signed onto a resolution supporting Wisconsin Gov. Scott Walker’s union-busting agenda. “It is essential to the democratic system [that] workers should always have a voice, and to take that away is not American,” Hynes told the media in Phoenix. 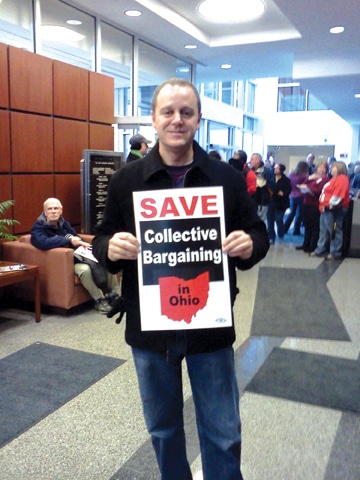