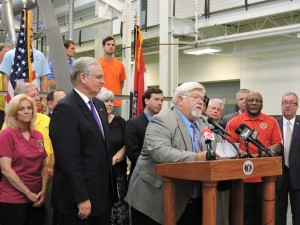 On Thursday, June 4, Missouri Governor Jay Nixon traveled to SMART SMD Local 36 in St. Louis to veto a toxic right-to-work for less bill passed by that state’s legislature. With a fired up crowd of hundreds of onlookers, he noted that “For generations, the ability of workers to join together and bargain collectively for fair wages and benefits has formed the foundation of the American middle-class. This extreme measure would take our state backward.”