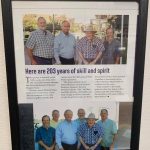 This past weekend, SMART SM Local 206 held their 100-year anniversary celebration in San Diego where SMART General Secretary Treasurer Richard McClees and the McClees family were honored with the naming of the hall on Saturday.

Additionally, GST McClees, a former Local 206 Business Manager/FST, was awarded his 50-year pin. To the best of everyone’s knowledge in attendance, he may be the first and only member in International history to receive his 50-year pin while still working as a dues-paying member.

The SMART Local 206 Hall was also named after the McClees family. Rich and his brothers, Chuck and Mike, all followed their father Mac into the sheet metal trade. Local 206’s hall, now McClees Hall, will forever be named after this great family and their over 200 years of service.