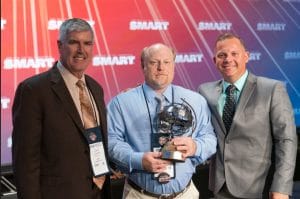 The Union Sportsmen’s Alliance (USA) honored SMART SM Local 5’s Jeff Burgin with the 2019 SMART Conservation Steward of the Year Award for his efforts to improve public access to one of the Southeast’s premier fishing and recreational boating destinations.  The award recognizes volunteers from each of the USA’s charter unions who have made exceptional contributions to the USA’s efforts to organize union volunteers to donate their time and unique trade skills to preserve North America’s outdoor heritage.

Burgin, of Dunlap, Tennessee, serves as SMART Local 5’s Chattanooga-area business representative. He also championed a USA Work Boots on the Ground (WBG) project to enhance access to Tennessee’s Lake Chickamauga—a popular destination for anglers and other watersports enthusiasts from within the state and around the country.

“Jeff was crucial to the Wolftever Creek fishing access project,” said USA Conservation Manager Rob Stroede. “He, along with the apprentices that he leads, donated their time on multiple weekends to see the restoration through to the end. Without his assistance and leadership, the project would have been difficult to complete. Now the renovated pier provides better access to the thousands of anglers and boaters who utilize the boat ramp, as well as to the many anglers who fish from the pier.”

For his part, Burgin said the efforts were a labor of love.

“After hearing Stroede speak about the upcoming project and the USA’s Work Boots on the Ground program at a Chattanooga Area Labor Council meeting, I was hooked and told him that we wanted to help,” Burgin explained. “The USA is spot-on with their efforts to provide union labor with an outlet to serve their communities with meaningful conservation projects that positively impact the environment. I’m thankful to serve and look forward to working with the USA again in the future.”

The Conservation Steward of the Year selection process begins with the nomination of potential recipients by peers or union leadership. From this pool of nominees, USA staff select individuals who have had the greatest impact on the USA’s mission, represented their unions in the most exemplary fashion, and made the biggest difference in their local community.