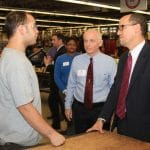 The Local 17 JATC is a leader in expanding apprenticeship training to under-represented communities through partnerships that include the Building Pathways Program, the Women Apprentices in Non-Traditional Occupations program, and the Helmets to Hardhats for veterans.

After a guided tour of the JATC from John Healy, Local 17 training director, Perez sat for a roundtable discussion with seven apprenticeship students as well as local union leaders and Massachusetts Labor Secretary Rachel Kaprielian and asked what, if anything, he should tell President Barack Obama about the program.

“I’d tell President Obama to promote this idea across the country, to get kids interested,” said Patrick Pochette, in his fourth year of the apprenticeship program and a also a member found through the Building Pathways program, “Because of this program, I have a good job.”

Perez met with representatives of the local media to discuss the new emphasis being placed on apprenticeships by the Obama Administration. In keeping with imitation being the sincerest form of flattery, Perez recognized the state of Massachusetts as a leader in developing new programs far beyond their time.  In particular, he recognized Local 17’s JATC as a model for inclusion that can be incorporated by every other trade across the United States.

Local 17 Business Manager Robert Butler noted that, “we appreciate the recognition and hope to continue to live up to it by being the best represented and highest skilled craftsmen in the Eastern New England sheet metal industry.”