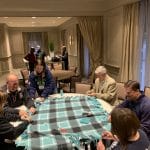 The weekend of October 4-6, saw the ninth international Tradeswomen Build Nations Conference, the largest gathering of its kind in the world. More than 2,800 tradeswomen representing 48 states and ten provinces gathered in Minneapolis, Minn. to share experiences and best practices with fellow tradeswomen, to learn about new programs and opportunities in the industry, and to engage with top leaders from government, industry and the biggest fifteen international building trades unions.

The three-day conference, held over the weekend, featured a day of service with the SMART Army, formal plenary sessions and over 25 workshops on a range of topics addressing unique and critical issues of tradeswomen.

The conference was kicked off with a surprise video of U.S. Supreme Court Justice Ruth Bader Ginsberg, whose speech roused the standing-room-only crowd when she told them, “Women who build are here to stay.”

The plenaries included addresses from NABTU President Sean McGarvey, AFL-CIO Secretary-Treasurer Liz Shuler, and a special appearance from SMART General President Joseph Sellers, Jr. who addressed the 2,800 tradeswomen in attendance.  Sellers also marched with his SMART sisters in through the streets of downtown Minneapolis for a parade and rally.  He also joined the 230 SMART attendees, a record group for this event, at a special SMART caucus and for a community service project with the SMART Army.