Futhey: 'State of our union improving'

DENVER — “I will not stand down, I will not retreat and I will not surrender until our members have the right to vote on their own constitution,” UTU International President Mike Futhey told some 700 cheering UTU officers and members here at a regional meeting in explaining his position on the court-sidetracked merger with the Sheet Metal Workers International Association (SMWIA).

Futhey’s comments came during his first state of the union message since taking office Jan. 1.

Futhey pledged to devote every resource at the UTU’s disposal to assuring the November election of Barack Obama and other labor-friendly candidates.

In regard to the SMWIA merger — currently halted by a federal court-imposed preliminary injunction — Futhey said he never opposed the merger. In fact, he voted for it.

But after learning that the “merger promised” wasn’t the merger to be delivered, Futhey demanded — as the federal court subsequently suggested — that a merged-union constitution be written and submitted to the UTU membership for approval.

“I was all for the merger that promised craft and general committee autonomy,” Futhey said. Then, before taking office, Futhey heard former UTU President Paul Thompson tell a UTU gathering that an intent of the merger was to subvert union democracy and “get accomplished what couldn’t be accomplished through democratic procedures” — specifically, an end to the UTU’s long and cherished craft and general committee autonomy.

At that point, Futhey said, he realized that he, and all other UTU members, had been misled — that the promise of the UTU constitution being inserted, intact, into the SMWIA constitution was a sham.

Futhey said he had several meetings with SMWIA General President Mike Sullivan to discuss the writing of a constitution for the merged union. Such a constitution has not yet emerged.

In regard to seven members of the UTU Board of Directors who seek, through SMWIA-financed court action, to force the merger’s implementation without an approved constitution, Futhey said he “never asked [them] to change their position. This is a democratic union and they have a right to say what they want to say.” Their appeal of the preliminary injunction is currently pending before the U.S. Sixth Circuit Court of Appeals.

Chief among the UTU successes in 2008, Futhey said, is a ratified and signed national rail contract reached by the negotiating team “that is superior to the agreement the Brotherhood of Locomotive Engineers and Trainmen got for their members.”

Futhey also cited recent Bus Department agreements as among “the strongest in the nation,” and praised a new Amtrak agreement that preserves the jobs of all assistant conductors.

“We know workers can do better and we are proving it every day on behalf of our members,” Futhey said, pointing to the UTU’s ramp-up of organizing efforts.

By training UTUIA field representatives in organizing, the UTU added 13 new organizers without increasing costs, Futhey said. “Whether it is eight new members in Alabama, or 800 new members in Orange County, California, we are going to organize them and represent them.”

Futhey also cited, as a recent success, the start-up of a UTU University, whose objectives are to make precedential arbitration awards easier to access and use; create a Web-based communications system tying locals, general committees, state legislative offices and the International together; and provide new Web-based training tools to assist local and general committee officers and legislative directors in serving members more effectively.

“No longer do we have vice presidents with their feet propped up,” Futhey said. “We have VPs out there working, and we have eliminated a vice president of administration,” with that work now accomplished by Assistant President Arty Martin and General Secretary & Treasurer Kim Thompson.

Thompson already has moved to Cleveland — as has Futhey — and Martin is in the process of moving to Cleveland.

Futhey said the UTUIA has increased its sales and turned a profit during the first quarter of 2008. 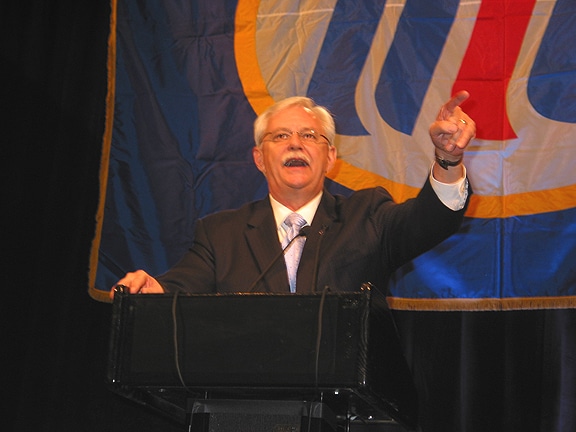 “I will not stand down, I will not retreat and I will not surrender until our members have the right to vote on their own constitution,” says UTU International President Mike Futhey in Denver July 9.