Lloyd W. “Corky” Swert, who served as United Transportation Union assistant president in the 1990s, passed away at his home in Hillsdale, Mich., on Wednesday.

Swert, a member of UTU Local 2 in Toledo, Ohio, hired on as a brakeman for the New York Central Railroad and joined the union in August 1953. He held a number of leadership positions in the UTU until his retirement in the mid 1990s, including being elected as general chairperson of Conrail North in 1975. 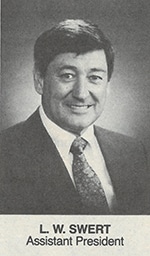 At the 1991 UTU Convention, he was elected to serve as assistant president, then retired at the conclusion of that term.

Swert made an appearance at the June 2004 UTU Regional Meeting in Reno, Nev., after a trying period for the union.

“All of us have to believe in ourselves and our union and be salespersons for the UTU,” he told attendees. “Collectively we can handle any problem and straighten out any difficulty.”

In lieu of flowers, memorial contributions are suggested to Hospice of Hillsdale County or Hillsdale Salvation Army.