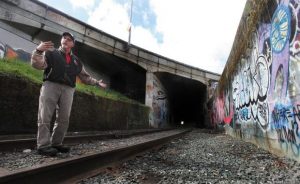 On a sunny morning in July last year, a Tacoma Rail train hauling 10 rail cars filled with cargo bound for the Mottman Industrial Park approached the tunnel in downtown Olympia at Cherry Street and Seventh Avenue.

As conductor Max Chabo entered the darkened 1000-foot long tunnel, at first he thought he saw debris on the tracks. But as he got closer, and the train’s headlight curved around the tunnel, Chabo saw that what looked like discarded blankets or trash was actually a man lying in the train’s path.