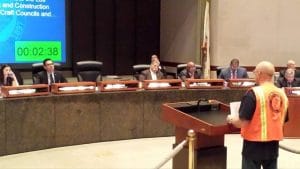 On April 8, the Long Beach (CA) city council unanimously approved a historic 5 year Project Labor Agreement. For the next five years, projects being built under city of Long Beach contracts that are worth more than $500,000 must be built under the PLA, along with requirements that the contractors prioritize their hiring towards local workers.

The agreement was negotiated with the Los Angeles/Orange Counties Building and Construction Trades Council, representing SMART and other union crafts. Two departments with large construction projects — the Harbor Department and the Water Department — are not subject to the agreement because they are governed separately under the City Charter.

The city will use an outside PLA Administrator to work with contractors, and there will be a joint administrative committee with members from the city and the trades council to oversee the agreement.  The minimum number of workers residing in Long Beach is set at 40 percent with those residing in Long Beach ZIP codes as a first tier, then those living in nearby cities and finally those in Los Angeles and Orange counties. A special focus is placed on dispatching disadvantaged and veteran workers.

Among those who spoke in favor of the agreement was Local 105 member Steve Gerdes who spoke on behalf of the PLA as a 22 year resident and homeowner in Long Beach.  The Long Beach PLA came about with the assistance of former Long Beach City Councilman Patrick O’Donnell who recently became a CA State Assembly Member. Assemblyman O’Donnell is the son-in-law of retired SMART Local 105 Business Representative Brad Rooker.

The agreement’s $500,000 threshold is lower by half than those previously negotiated in Berkeley and Contra Costa, CA.

Sheet Metal Local 105 Business Manager Luther Medina noted that this agreement is “a step in the right direction that will further prove the value our skills bring to local taxpayers and the opportunities we can provide local residents with a solid career in our trade.”