Lanning is a member of SMART TD Local 1629 and 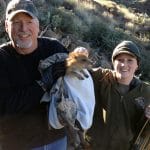 was selected from nearly 5,000 entrants. She is also a member of the USA, which partnered with Carhartt to honor the American worker by awarding a hunt of a lifetime to one union member and a guest.

Lanning chose to bring along her father Dana Lanning, of Phoenix, who has worked as a union crane operator for more than 30 years. Dana was a member of the International Union of Operating Engineers Local 428 and is currently a member of the International Brotherhood of Electrical Workers Local 769. He introduced Lindsay to hunting, taking her on dove and quail hunts when she was a kid and guiding her on her first elk hunt when she was 15. The two remain close hunting partners to this day.

“This is an amazing opportunity,” said Lindsay, “It’s something that my father and I would never treat ourselves to, but it’s absolutely an experience that we’ve dreamed about.”

Big Chino Guide Services, one of the Southwest’s premier hunting outfitters, will guide Lindsay and Dana this fall, with the hope of getting them within range of some of New Mexico’s biggest bull elk.

“We couldn’t be more excited for Lindsay and her father,” said Mike d’Oliveira, USA’s deputy director. “Their story resonates with so many other families who have forged generational bonds through their union membership and also their time enjoying the great outdoors.”

The USA is a nonprofit conservation organization created by and for union members and their families. It harnesses the power of expertly-trained union volunteers to create and improve public access to the outdoors, improve wildlife habitats, mentor youth in the outdoors and restore America’s parks.

Since 2012, Carhartt has collaborated with the USA, helping it to raise funds for conservation projects and unite the community around a shared passion for the outdoors. Each year, the USA and Carhartt produce a national sweepstakes. This year, the promotion centered around the theme of “Hunt Your Legacy” to align with the introduction of Carhartt’s all-new Rugged Outdoors line of high-performance hunting gear.

“As a family-owned company tracing our roots back to 1889, we have a deep appreciation for the traditions and heritage of our customers,” said Brian Spiro, Carhartt’s strategic partnerships manager. “Our partnership with the Union Sportsmen’s Alliance provides us with the opportunity to reach a vast number of dedicated union members who share a rich outdoor legacy.”

The sweepstakes ran from October through December of 2016 and drew the support of several international unions who collectively delivered the promotional ad to more than 2.5 million homes. All active and retired AFL-CIO union members were eligible to enter.

“This contest garnered attention from union members all over the nation,” said d’Oliveira. “It proved the strength of the bonds of so many working men and women to the outdoors and to Carhartt, a brand that shares their rich history, acknowledges the value of a hard earned dollar and encourages their rugged pursuits.”