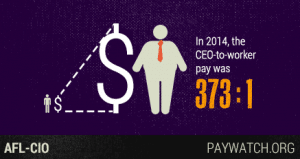 This 2015 edition of Paywatch (www.paywatch.org) shines its light on Walmart, where the CEO of the nation’s largest employer, Doug McMillon, earns $9,323 an hour. An entry-level Walmart employee earning just $9 an hour would have to work for 1,036 hours just to equal the pay McMillon earns in one hour. That’s nearly a half a year, assuming that employee works 40-hour weeks.  The report also also delves into the wealth of the six Walton family members who have more combined wealth than the total wealth of 43 percent of America’s working families.